Instead of Taking a “Holiday,” Americans Need to Consume Less Gasoline to Reduce Prices at the Pump.
by Jonathan French

President Biden is now backing the idea of a three-month gas tax “holiday,” or a pause in collecting the 18.4 cent federal gas tax. This idea is something that has been proposed in both houses of Congress to lower gas prices. He’s also calling for states to create similar holidays for their state gas taxes or provide equivalent savings to consumers.

I have one message for him:

A gas tax holiday may sound like a good idea, but let’s take a look at what that actually means for the consumer and what the other effects could be as a result.

First of all, according to the US Department of Energy, the average American driver consumes around 500-700 gallons of gasoline per year. So, let’s go with an average figure of 600 gallons per year.

Now divide that number by four for the three-month pause and then multiply it by the 18.4 cents per gallon and what do you get for savings?

It’s a whopping $27.60, the equivalent cost of about 5 gallons of gas at today’s prices.

In the meantime, the federal Highway Trust Fund, which funds all surface transportation programs, would lose about $10 billion dollars because of that pause in the collection of the gas and diesel taxes over that three months. Keep in mind the Fund already received a bailout in the Bipartisan Infrastructure Law (BIL) of $118 billion from the General Fund over the five years of the law because of insufficient funding from the gas tax. This means a portion of our federal income tax is already subsidizing transportation in addition to the federal gas tax we pay.

Congress would then have to come up with a funding source for that additional $10 billion. Otherwise, it would have to reduce funding to the programs that were reauthorized and created in the BIL, which would only set off more partisan fighting, and would also further reduce the effect of the signature piece of legislation for this Congress and the President.

For states, a gas tax holiday would mean a complete loss of revenue for state transportation programs for those three months. Considering that most states rely on their state gas taxes to fund transportation projects and services and were still facing shortfalls in needed transportation funding even with the added funding from the BIL, this could mean delaying or canceling much needed projects and cutting services that would improve and save the lives of their citizens. The savings might be a little more to consumers than the pause in the federal tax would provide depending on the amount of each state tax, but it’s still not worth the cost of the potential delays, cancellations, and reduction in services.

Most importantly, a gas tax holiday doesn’t lower the price per gallon the oil companies are setting for gasoline. If you look at this graphic below, you’ll see that since we’ve been driving more and increasing our consumption of gas starting in the beginning of 2021, gas prices have continued to rise. This means that oil company profits have also risen. Lowering gas prices by reducing the tax collected also will only cause Americans to drive more, which means the oil companies will continue to raise the price of what they charge at the pump, further increasing their profits, while erasing any consumer savings created by lower gas prices.

There is a better alternative, and as I stated earlier in a video I made, it has been proven to lower gas prices:

You can see we did just that at the beginning of the COVID-19 pandemic due to shutdowns reducing travel, and gas prices dropped like a rock. There was a slight decrease in price at the end of March as well, as the increase in vehicle miles traveled started to slow down due to higher prices.

This also isn’t a new idea, as the International Energy Agency (IEA) proposed this idea of reducing consumption to prevent a worldwide oil shortage and higher prices back in March in a 10-point plan.

Two actions mentioned in the IEA plan are something that we can all do collectively:

According to fueleconomy.gov, if we reduce our speed on the highway by 5-10 MPH, we could actually see an equivalent savings of 35 to 70 cents per gallon based on current gas prices. This savings is just about two times to four times the savings drivers would see with a federal gas tax holiday, and it doesn’t completely reduce the revenue accrued to the Highway Trust Fund.

Reducing speeds has also been proven to increase safety, especially for vulnerable road users (mainly pedestrians and cyclists), as you can see from the image below. With over 7000 deaths of vulnerable road users in 2019, and that number expected to rise higher for 2021, we need to take drastic action to save lives. 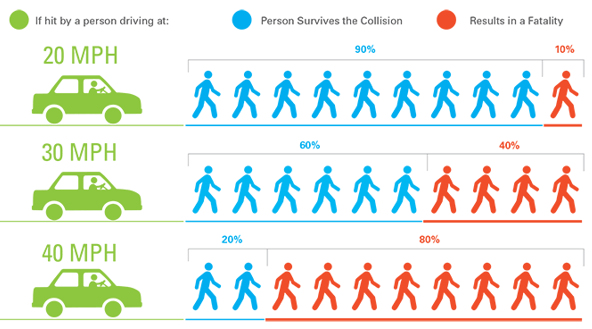 Just by doing these two things collectively, we could use our power as consumers to reduce gasoline consumption, which means that oil companies would see a drop in demand and a decrease in profits. Therefore, they would be forced to lower gas prices to try to increase demand to increase their profits again, just as they did during the beginning stages of the pandemic.

Of course, we can also replace more gasoline-powered vehicles with electric vehicles (EVs) (also mentioned in the IEA plan), but until Congress acts on rebates for EVs, they will likely remain too expensive for many consumers. Still, those who can afford to do so, should also highly consider an EV as their next vehicle purchase.

Collective consumer action to reduce gasoline consumption is what is needed now to lower gas prices, and by reducing speed and driving less to reduce consumption, we will also save lives. President Biden could solve both a gas price issue and a safety issue without having to go through Congress simply by creating a national campaign that asks Americans to drive slower and drive less, and he has the perfect messenger in Transportation Secretary Pete Buttigieg to do it.

That’s the action that the White House should be taking and the messaging they should be sending to all Americans this week, instead of taking a “holiday” from desperately needed transportation revenue that will only wind up padding the vacation funds of oil company executives.